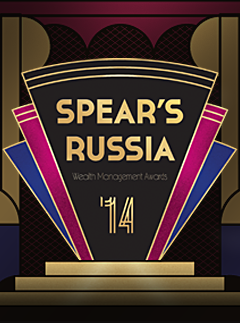 On the evening of December 4, representatives of the best of the private banking and wealth management industry were announced at the SPEAR’S Russia Wealth Management Awards held at Moscow’s Mossovet Theatre. This was the sixth ceremony for the Awards. The event was once again hosted by Ivan Urgant.

The Bank of Moscow received the accolade as Best Russian Bank, while Rietumu Banka was named the first private bank in the Baltic States and the CIS for the third year in a row. Among foreign private banks, the Judging Panel also singled out Friedrich Wilhelm Raiffeisen and Goldman Sachs: the former, as the best foreign bank in Russia, and the latter, as the best bank serving HNW Russians abroad.

Three companies were presented with Andrei Vdovin’s special Editor-in-Chief Award. QB Finance was named “Best Investment Company of the Year”, Absolut Bank received the award for “Best Merger of the Year”, and JLC Management was recognized for the “Best Real Estate Development Project”. The award from SPEAR’S Russia former Editor-in-Chief Alexander Gafin was awarded to M2M Private Bank for “Best Loyalty Program in the PBWM Industry”.

SPEAR'S Russia Wealth Management Awards is an annual award for the private banking, wealth management, and related industries. In 2014, legendary Scotch whisky Chivas Regal was the Official Partner, Tonino Lamborghini Mobile and Gaggenau were partners. PwC was the independent consultant of the Awards. SPEAR’S Russia magazine and PBWM.ru website were the organizers of the Awards.

Creative and commercial management of the project is provided by MEDIACRAT.